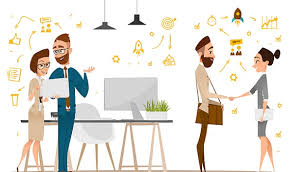 A. Alison Ward is Head of Global Corporate Responsibility at Cadbury, the chocolate maker. Listen to the first part of the interview and complete this information about Cadbury’s Cocoa Partnership.

B. Listen to the second part and complete these extracts with up to three words in each gap.

C. Listen to the final part and answer these questions.

A. Complete the table below with these verbs, which are often used with the word relations.

B. Choose the correct verb in each sentence.

C. Match these sentence halves. Then make five more sentences with the verbs in Exercises A and B.

a) are a credit to its highly effective PR Department.

b) have cemented relations between the two companies.

c) its close relations with several major foreign investors have been jeopardised.

d) is causing stormy relations with some of the company’s suppliers.

A. Two executives are talking about building relationships with clients. Put the conversation in the correct order. Then listen and check your answers.

a) They were both annoyed. My contact thought I had let him down, and his boss simply decided not to turn up at the meeting. We’d set up a meeting in Brussels by e-mail, but he called it off at the last minute. I’d already checked in at the hotel.

c) Well, I’m going to carry on working until about six. We could meet after that.

d) How did you turn it round?

e) It’s fine now, but at the start of the year, it was disastrous.

f) So, how’s the relationship with Toyota going?

g) Well, I went over my contact’s head and went directly to his boss at Toyota Motors Europe. I was really trying to clinch a deal.

h) Glad it worked out. Anyway, are you free for a drink later?

i) Well, I had to build up my relationship with my original contact again. At first, he kept putting me off. But eventually we met up and I focused on our relationship, not the next sale. Now we get on really well and sometimes play golf together.

j) Was he annoyed

B. Underline all the multiword verbs in the conversation in Exercise A. Then decide which of them has a similar meaning to each of these verb phrases.

C. Rephrase these comments using the multiword verbs from Exercise B.